The third major release of Mozilla’s open-source web browser, Firefox, is now available for download on Mozilla’s website. The new version of Firefox is a major improvement over previous versions of the browser. Significant improvements have been made in performance & security and several useful features have been added in many key parts of the browser including the address bar, bookmark manager, and download manager.

One of the first things you will notice when using Firefox 3 is the redesigned interface. One of the main goals for Firefox 3 was to better integrate the browser with each computer platform in order to make Firefox feel more natural. Thus, there are now four different default themes for Firefox 3. One each for Linux, Mac OS X, Windows XP, and Windows Vista. The biggest change is to the design of the back and forward buttons on the browser tool bar. The new interface combines the two buttons into a single composite button shaped like a keyhole. The back button is the larger portion of the keyhole. The forward button is smaller and to the right of the back button, and a dropdown menu to the right of the forward button lets users view all the pages they have browsed in the current session with the page they are currently on shown in bold type. 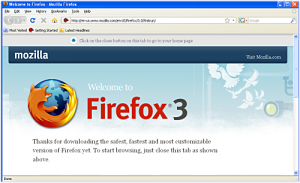 In Firefox 3 the Location bar has been completely revamped. The new Smart Location Bar, “AwesomeBar”, allows the URL field in Firefox to be used for keyword searches of its bookmarks and history. The Smart Location Bar will match what is typed in against page titles, URLs, and tags in the browser’s bookmarks and history to return a list of results that show a page’s favicons, title, and URL which you can then choose from. Searches are instantaneous and happen as you type.

In Firefox 3 the Add-on manager has been expanded to include a new “Get Add-ons” tab where you can view recommended add-ons, search for new add-ons, and install add-ons with a simple click. The Add-ons manager is now fully integrated with the addons.mozilla.org website. The revamped Add-ons manager is also used to work with any plugins that are installed. As with add-ons in Firefox 3, if a plugin is found to contain a security vulnerability, Firefox will automatically disable it and show where to get an updated version.

Instead of the password dialog box, Firefox 3 presents the option to store a given password using an information bar that slides down from the top of the browser after the user has logged in. In addition, this information bar is non-modal so you can continue using the browser without being forced to dismiss the message first.

Smooth scrolling between tabs has been added to Firefox 3. When you scrolled your tab bar in Firefox 2, the tabs moved back and forth a full tab at a time. Opening a group of tabs now appends them to existing tabs and when shutting down Firefox 3 asks if the user wants to save the open tabs and windows.

Page zoom in Firefox 3 now includes both full page and text only zoom. Full page zoom scales the page layout and structure while allowing for complete control over the size of the displayed content. A extremely useful feature of page zoom is that Firefox now automatically remembers the zoom level that is set on a site basis. Text only zoom, operates as before by only zooming the text on a page, leaving the images and page layout untouched.

Bookmark tags are a way to add information to a bookmark, allowing you to organize them in a much more flexible manner than old-style Folders would allow (think del.icio.us). Smart folders are “saved searches” that automatically update when you add new items matching that search to your bookmarks.

Firefox 3 has made browser history more useful also. Besides being a major source of information for the Smart Location Bar, History now stores sites’ favicons along with the other location data to make scanning and identifying history entries much easier. 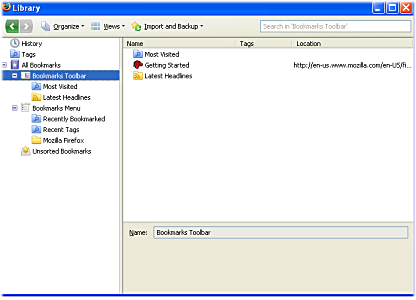 Among the major new features in Firefox 3 are its offline capabilities and its ability to seamlessly interact with Web-based applications and services. The new version of the browser makes it possible for sites to deliver applications that people can use even when they are not connected to the Internet allowing these sites to work with a browser in much the same way that traditional applications work with an operating system.

Ensuring that users are safe and protected on the Web is one of the biggest challenges a browser maker faces. Firefox 3 attempts to keep users away from bad sites by giving them information to help make a decision about the validity of a website. A user is now warned when visiting a site known for serving malware and will have to whitelist a to access it. In addition to the malware protection, Firefox 3 also has improved phishing protection. Reported phishing sites are now blocked up front, before the page is even loaded.

Firefox 3 also introduces a new security feature known as the Site Identification button. This button replaces the padlock icon and attempts to determine as much as it can about the site. It makes this information easily accessible through a button at the left end of the location bar. This button (gray by default) turns blue for encrypted connections (SSL) and green for sites using EV certificates (think eBay or PayPal).

Behind the curtains the Mozilla developer team have worked hard to improve the speed, memory usage and reliability of the browser. Firefox 3′s memory footprint has been dramatically reduced. One of the biggest issues with previous versions of Firefox was its performance record. Firefox 3 is the fastest, slimmest version of Firefox yet. Speed tests are showing a 2 to 4 times improvement over Firefox 2 and memory usage tests show that Firefox 3 is 2 times more efficient than Firefox 2.

Mozilla Firefox 3 is a significant improvement over Firefox 2. Overall, the browsing experience feels better. The decreased resource consumption, better security, and little details in areas such as bookmarking and the location bar show that Mozilla took a step in the right direction with the latest version of the Firefox browser. With this release Mozilla Firefox 3 is the fastest and most feature rich Web browser available on any platform.

This entry was posted on Tuesday, June 17th, 2008 at 9:27 pm and is filed under Browsers. You can follow any responses to this entry through the RSS 2.0 feed. Both comments and pings are currently closed.