This entry was posted on Tuesday, October 25th, 2005 at 12:01 am and is filed under Design. You can follow any responses to this entry through the RSS 2.0 feed.

Roger Johansson has just finished up the final part of a very useful series on CSS 2.1 selectors. The articles make it a little easier to understand selectors and how they work. If you are new to style sheets, or even an old pro, make sure to read these articles. Selectors are fundamental to the whole style sheet process.

This entry was posted on Monday, October 24th, 2005 at 8:16 pm and is filed under Design. You can follow any responses to this entry through the RSS 2.0 feed. 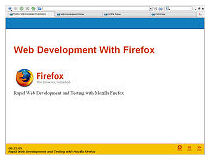 This entry was posted on Sunday, October 23rd, 2005 at 6:15 pm and is filed under Firefox. You can follow any responses to this entry through the RSS 2.0 feed.

Let the Internet Be Free and Prosper

A topic that has not gained a lot of attention until recently is a proposal to transfer oversight of the Internet from ICANN and the United States to a multi-governmental UN bureaucracy. Basically, it is a call from countries like Brazil, Iran, China, and the EU to assert control over the Internet’s core management functions. This issue has jumped back into focus as Minnesota Senator Norm Coleman has introduced a United States Senate resolution that calls on the Bush administration to oppose transfer of Internet control to the UN or any international body. In his statement, Sen. Coleman stated that:

ICANN has managed things quite well. The UN should be making sure that ICANN is not interfered with, not imposing more restrictions and regulations on them. Those calling for change have not communicated any real technical reason why this change needs to be made. Their problem, with the current systems, appears to revolve around an axe to grind over certain US foreign policy decisions and/or a desire to impose restrictions on the flow of information to their own citizens.

“It would be profoundly dangerous to now set up an international mechanism, controlled by governments, to take over the running of the Internet. Not only would this play into the hands of regimes bent on limiting the freedom that the Internet can bring, it also risks stifling innovation and ultimately endangering the security of the system. Even trying to set up such a mechanism could cause conflicts leading to today’s uniform global system being Balkanized into different, more or less closed systems.”

This entry was posted on Saturday, October 22nd, 2005 at 6:10 pm and is filed under Web. You can follow any responses to this entry through the RSS 2.0 feed.

OpenOffice 2.0, a free alternative to Microsoft Office, has just been released. Open Office features a Word compatible word processor, a Excel compatible spread sheet program, and a Power Point like presentation software. Two nice features in OpenOffice are the ability to create PDF and Flash files. The main drawback to OpenOffice still seems to be it is slower than Microsoft Office when opening and saving documents.

Note: For those Palm users out there remember if you want to ability to save files as DOC files you need to do an custom install. When the program asks for a list of features to install find the section labeled mobile device filters and under Palm click on the drop down box selecting ‘this feature, and all sub features, will be installed on local hard drive’.

This entry was posted on Friday, October 21st, 2005 at 12:59 pm and is filed under Software. You can follow any responses to this entry through the RSS 2.0 feed.

Why is the growth of Mozilla Firefox Slowing?

Dave Shea and Roger Johansson are both talking about why Mozilla Firefox has seen a slow down in its growth rate, stopping at a market share of around 15%. This probably should be excepted. It matches a typical slowdown in interest for any new software release as time passes. Firefox has gotten the base of early first adopters and now must try to pick up everyone else, which is a lot harder against a competitor that is so entrenched in the marketplace. The initial Firefox enthusiasts have converted people, those who have been converted are not doing any converting themselves.

For Firefox to continue to grow above the 15% being discussed, the browser needs to come pre-installed, as the default, on boxes from major manufactures. Most people do not know what Mozilla Firefox is. They know they click on the blue ‘e’ to get to the internet and when they click on a link in their email client a web page loads in a piece of software. They are not interested in taking the time to figure out how to download another browser, when they already have one that they believe meets their needs. For most people Internet Explorer seems good enough. It will be interesting to see if the growth picks up some more with the impending release and publicity of Firefox 1.5.

This entry was posted on Thursday, October 20th, 2005 at 9:39 am and is filed under Firefox. You can follow any responses to this entry through the RSS 2.0 feed.

The Firefox Tweak Guide has been updated so that all the tweaks in the guide are compatible with Firefox 1.5 Beta. The tweak guide is full of tons of ways for both Firefox veterans and newcomers to get the most out the browser.

This entry was posted on Monday, October 17th, 2005 at 8:29 pm and is filed under Firefox. You can follow any responses to this entry through the RSS 2.0 feed.