Not Palm or Firefox related but my poor puppy dog suffered a complete brake in her toe a couple of days ago. Very nasty brake. She is doing better, as shown in the picture, but Cosmo is still not her normal self. A week of all nighters with a whinning dog can really tire someone out. 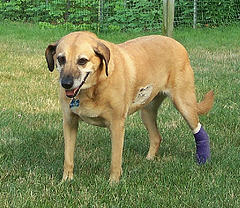 This entry was posted on Monday, July 18th, 2005 at 4:20 pm and is filed under General. You can follow any responses to this entry through the RSS 2.0 feed.

Published on in Palm

In the same vain as the Facer Nuvola theme released earlier here is the Nuvola ZLauncher theme. This theme is based on the Nuvola icon theme created by David Vignoni at Icon King. New to this theme is that the Popup Setup List icons have been skinned. All feedback is appreciated.

You can grab the Nuvola ZLauncher theme from PDA Shine. 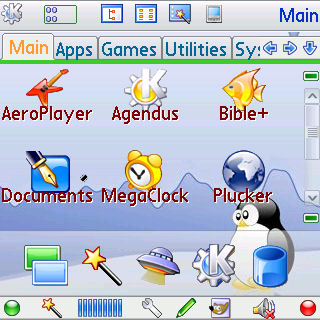 Note: If you look closely at the screenshot you can see that the plugin status icon has been skinned. I will post instructions shortly on how to do this.

Published on in Firefox

A new version of Book Burro is available which adds Abebooks, Powell Books, and caching. Get Book Burro at bookburro.org.

This entry was posted on Monday, July 18th, 2005 at 4:00 pm and is filed under Firefox. You can follow any responses to this entry through the RSS 2.0 feed.

A little slow on this but SlayerOffice’s Steve Chipman has released version 2.0 of his Mouseover DOM Inspector bookmarklet. His MODI “allows you to view and manipulate the DOM of a web page simply by mousing around the document”.

This entry was posted on Tuesday, July 12th, 2005 at 3:33 pm and is filed under Design. You can follow any responses to this entry through the RSS 2.0 feed.

Wi-Fi Stealing Is a Crime

Police have arrested a man in St. Petersburg, FL recently for using someone else’s wireless Internet network charging him with “unauthorized access to a computer network, a third-degree felony”.

There are many ongoing conversations about this issue. Many want to argue that since the man was only using wifi and not really stealing anything, no real damage was done or law broken. We are not dealing with any gray area of the law here, it is pretty simple. While there is no exact law dealing with this issue the law that should be applied to this matter is as follows. The U.S. federal computer crime statute, Title 18 U.S.C. 1030, makes it a crime to knowingly access a computer used in interstate or foreign communication “without authorization” and obtain any information from the computer. The man was “piggybacking” a WiFi signal to access a device that was providing an Internet connection. Secondly, it seems safe to say that routers, gateways and access points all constitute computers under federal law.

We have way too many laws on the book as it is, let’s not write more laws. Let the law be simple. The man did not have authorization to access the computer network. Right or wrong, that’s the law, and he broke it and thus should be charged under the law. If you do not like the law, work to change it.

Published on in Design

Todd is suggesting some “link love” for Dave Child’s web developer cheat sheets. They include CSS, Mod-rewrite, MySQL, and PHP. These quick reference guides are another way to make your life easier.

This entry was posted on Monday, July 11th, 2005 at 9:33 am and is filed under Design. You can follow any responses to this entry through the RSS 2.0 feed.

Our Thoughts and Prayers to Those in London

Our thoughts and prayers go out to the families of those who and were injured in the London terror attacks. It is saddening to see another example of the death and destruction caused by extremists who are trying to defeat freedom across the world.

“It’s important . . . that those engaged in terrorism realize that our determination to defend our values and our way of life is greater than their determination to cause death and destruction to innocent people in a desire to impose extremism on the world.

Whatever they do, it is our determination that they will never succeed in destroying what we hold dear in this country and in other civilized nations throughout the world.”

This entry was posted on Friday, July 8th, 2005 at 11:30 am and is filed under General. You can follow any responses to this entry through the RSS 2.0 feed.